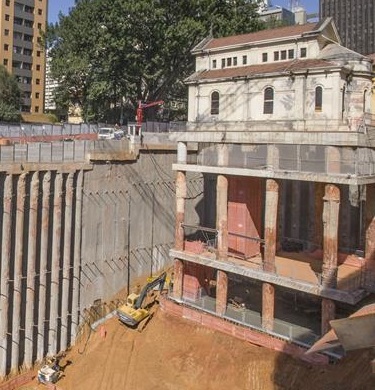 Have you ever imagined a 1200-ton chapel, 96 years old, suspended 31 meters high? It looks like a movie scene or some tourist spot in a city far from Europe. But this reality can now be seen at Rua Itapeva, 538, one block from Avenida Paulista, in São Paulo. The structure is part of the construction of the Matarazzo City complex, which includes a commercial tower, a Hotel and a Shopping Mall in an area of 27 thousand square meters, scheduled to open in 2019.

At the moment, this is the largest private work of revitalization of historical patrimony in Brazil. And the LPC Latina is responsible for its instrumentation, guaranteeing the integrity of the buildings listed by the Condephaat (State Historical Heritage Council) that will be kept at the place: church, college, Hospital and Maternity Matarazzo.

Contracted by MPD Construtora – the executor of the work, LPC Latina monitors horizontal and vertical displacements with the installation of instruments such as inclinometers, deformation meters and surface landmarks. “As important as designing the project and carrying out the work is ensuring monitoring in urban areas and for special foundations, predicting the behavior and characteristics of the terrain when subjected to loads, movements and other actions that may originate in natural phenomena or be caused by the work itself, “explains Airton Grigoletto, partner of LPC Latina.